Gee, based on Bruce Carson's past RECORD, one would have thought that conservative party leader Stephen Harper would have felt betrayed a little earlier than on the eve of an election.  Wonder who the source was who released that tidbit?  Maybe one of the other close aides to him?  Remember, while Carson was bedding a hooker with a website, he said he had regular access to Stephen Harper.  And Harper KNEW that from what we hear and see in media reports.

So today's announcement of Harper feeling betrayed is more than a little suspect.

Can't help but wonder if there has been a flood of patronage appointments this week that we haven't heard about yet.  It seems to be Harper's way - give your buddies and your buddies' buddies the best jobs around. 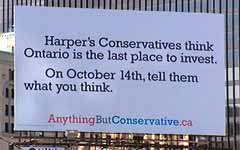 With the electricity rates rocketing up in Ontario why would anyone want to invest in a business there.Anyhow in my jaundiced view there is not a political party of any stripe immune from Lord Acton's maxim once they attain power.