Mirror, mirror on the wall ... 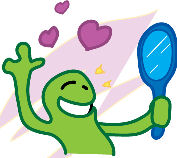 Where do we cross over from self-esteem into narcissism? That’s the question being asked in a report in today’s USA Today. In some ways, it suggests that our preoccupation with making people “feel good” has become an obsession.
A recent study at Ohio State University shows that young people are so hooked on praise that they crave a boost to their self-esteem over most anything else. More than sex, money, or food. It also suggests that young people are not adverse to pushing someone out of the way if it means they get the praise, even if they don’t deserve it.
Another writer suggested this is what happens when you grow up getting trophies just for showing up. We’re no longer allowed to have winners and losers – everyone who competes must be a winner. Why? In life, you’re going to come in second, third, tenth, whatever. Someone will get the job – maybe not you. You will fail. You will lose the deal. It’s life. But are we conditioning our kids and in some ways ourselves, to be unable to handle loss? Have we become so hyped on the notion of winning that losing sends us into depression?

Speaking of hype and narcissism, it’s interesting to see the woman described as the most important person in the US entertainment business out shilling for her new network. Oprah Winfrey paid a visit to what’s billed as the “TV tour” this week – when new shows are paraded in front of the TV writers to see who can score the most ink. There was a certain element of breathlessness in the way the ink-stained scribes described her visit.

I love the way that Winfrey has become almost like royalty for the monarchically deprived Americans. The images abound: Winfrey anointing a book. Winfrey scoring a deeply personal interview with Michael Jackson. Winfrey generously setting up a girls school in Africa. Winfrey sharing tidbits of her personal life – diet, lifestyle, etc. Throughout it all, it’s easy to forget that what she is doing is selling the Winfrey brand. The same way Wal-Mart sells falling prices and Loblaws sells Presidents Choice products. It’s all about the sale.

She’s also smart enough to realize that just like any product, she has a “best before date”. Her TV ratings have steadily tapered off. Ratings for her final season are averaging 6.7-million viewers in the U.S., and roughly a half-million in Canada. Those are healthy numbers, and ahead of most daytime shows, but a far cry from a decade ago.

No question but that her self-esteem has taken a hit when she sees those declining numbers. And just like the young people in the survey, she’s moving on to another fix.

I suppose its just one more sign of the coming demise of the American Empire.

Gosh I hope not. The empire will live forever; we on the other hand, will be dust.

I think I mentioned to you before VP about the survey done on Grade 10students when asked what they wanted to be when they graduated and 90% said "Famous."
Surely one of the more dramatic symptoms of our current culture?
XO
WWW

The innocents have such romantic views of the world. While some try to escape the world; others want the world to see them. We are strange creatures indeed.