If it bleeds, it leads - CBC operating principle 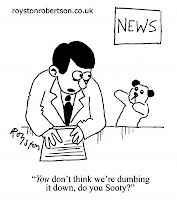 This is one of those days when I’ve spent a lot of time thinking about the news media. The reflection was prompted by a piece on CBC radio this morning. It took the form of a commentary by a woman in Rose Blanche talking about Morgan John Taylor, the man charged in connection with the traffic fatality in Port aux Basques yesterday.

By CBC’s new standards, it was a long piece. What happened is that some reporter did an interview and then edited out his/her questions and left only the voice of the woman speaking. We didn’t get to hear the possible leading questions or coaching of the interviewee to offer comments the reporter wanted.

Instead what we did hear was a woman, who apparently knows Mr. Taylor, going on at great length about his life and his alleged mental illness. She described herself as a friend of Mr. Taylor’s and went into a lot of intimate detail about what she thinks caused him to act the way he did that led to the death of a young man on the streets of Port aux Basque.

My thought as I was listening to the piece was how little dignity was being afforded Mr. Taylor by the CBC in broadcasting this “interview” and by the woman in going into so much detail about him. A similar account was broadcast on television tonight and quite frankly, when I saw where it was going, I changed the channel. I don’t need the tabloid fodder that this material provides to the voyeuristic media managers who thinks it satisfies some sort of public interest. In my opinion, it is sinking to the lowest common denominator in tabloid trash journalism which was never the domain of the CBC. Now it seems that ‘if it bleeds, it leads’ is the editorial operating principle of those who plan the CBC early morning show.

Is it any wonder that the public’s assessment of the accuracy of news stories is now at its lowest level in more than two decades of research surveys, and people’s views of media bias and independence now match previous lows? In the 20-years of research conducted by the highly respected Pew Centre in the United States, there has been an ongoing decline in the level of trust people place in the news media.

Today’s broadcast is just another reason not to listen.

I saw CBC's initial interview Thurs. evening, and felt the same as you did.. was a bit surprised that they let this private be broadcast. In an already tragic situation, that doing could add further challenges. It surely would not help healing, but instead cause further anguish.

I agree completely Charlie. I really do not understand the current trends in journalism that promote this sort of thing. I know that all of these fresh new BJs are trying to impress someone as they cut their teeth here on the rock, but for me, it goes too far. Editorial guidance seems to be either sadly lacking or poorly formed a lot of the time now on the public broadcaster. If I hear another story with the lead "this may offend some people," I'll barf. Why put something on the air in the morning when children are listening that can offend people? Why have so little respect for a person's dignity that you will let someone repeatedly say on the air that the person has mental health issues? Why cut out the questions? Are you afraid we'll hear the real way in which the interview was conducted? The problem is that from listening to some of the supporting cast on the morning show that they consider themselves to be such award winning performers, they've forgotten what good journalism is all about.

Very interesting VP. I just watched "Broadcast News" after many, many years and was stunned at how relevant it was in today's world.
Infotainment, that's all we're getting today in most news outlets.
Responsible and respectful journalism has vanished.
XO
WWW

Interesting. I've been thinking about your post for a few days now. When I saw the broadcast, I held my breathe as the interviewee went into speculation mode about mental illness, even going so far as to suggest which illness he was suffering from. Having said that, there were elements of what she said that I could have stood up and cheered - mostly centred around the lack of support for people with mental illness.

WWW, you that right about the responsible journalism stuff. It still happens, but while it should be the norm, now it's the exception.

Lisa, agreed - advocacy is important, but not at the expense of the privacy and dignity of the person. That's where she and the press crossed the line. Shouldn't have happened. Someone on the editorial desk should have used better judgement.