Cut off their cheques 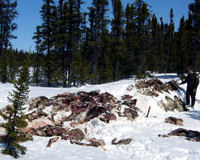 "Why do we let them get away with it?"  That was the question from a friend of mine last night as we were talking about the slaughter of dozens of caribou in the area between Happy Valley-Goose Bay and Churchill Falls that is inhabited by the large George River Herd.  I wish I had an answer for him.
It’s almost as if we are powerless to do anything about the Innu hunters who routinely thumb their nose at the rest of us and go in for sport killing as much as anything else.  A hunt by the same bunch last year proved that it wasn’t for food - they do it simply because they know that the conservation officials and the police won’t touch them.  “Treaty rights,” they’ll say while the rest of us say bullshit but can’t do anything about it.
I had a chance a number of years ago to live among the Inuit and the Innu in villages above the Arctic Circle and learned of their respect for all life, including wildlife.  They took only what they needed and made use of every last scrap of skin and bone.  The old and the sick were fed first and then the rest of the community had a share.  They would no more think of killing dozens of caribou than they would of abandoning their child.
So why the difference?  The people that do this slaughter are so far from true Innu values that I’m surprised they even call themselves Innu.  I’m surprised the rest of us let them.  If they want to thumb their noses at the rest of us, then cut off their cheques.  Nothing else seems to get their attention.

I too am sickened by this and there seems to be more to it than meets the eye.
XO
WWW

Just a point of clarification. The George River heard is migratory and roams between the area you mentioned all the way north into Ungava Bay and Northern Labrador.
The threatened herd in that area is the Red Wine herd, but then who can tell the difference between both.
As what to do, well one would wish something rather than nothing.

The old ways of Innu and Inuit are almost gone thanks to assimilation, colonialism and the wage economy.

WWW & Brian, good points both. Thanks for the clarification Brian. I am aware of the Red Wine herd but didn't think about it as I was writing the piece. My grief about all of this is that it's purely political and they're decimating the herd to make a point. That is so far from Innu values that it's sickening. The latest I heard on the news this week is that they want to expand their kill zone.