The headline reads, “Mohawk Warriors to get military apology.”

I guess I’m weary of all of these apologies that are offered to various groups in a pathetic attempt to satisfy some sort of need for self-flagellation.

In this case, it deals with a document issued by the Canadian military in the wake of what was described as “the Oka crisis” in 1990 which lasted for 78-days and resulted in the death of 31-year old Quebec police officer, Corporal Marcel Lemay, who was killed in a gun battle between the so-called warriors and the police. 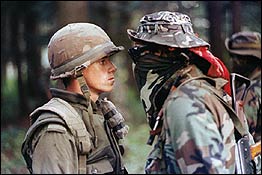 The issue was some wooded property which the Oka town council had agreed to bulldoze to expand a golf course. The Mohawks claimed it as sacred ground and the fight was on. The image that most of us remember from that incident was one of the Mohawks trying to stare down a young Canadian soldier who stood his ground and never lost his cool, unlike the masked thug in front of him. (Strange how these anarchists seem to wear masks all the time. Are they afraid that someone will recognize them?)
Anyway, sometime later, the Canadian military issued a draft form training manual in which terrorist groups, including some international groups are discussed and the Mohawks are mentioned. In particular, groups like the Mohawk Warriors "seek particular political concessions in their relationship with national governments, and control (either overt or covert) of political affairs at a local/reserve ('First Nation') level," the draft manual says.

It’s a statement of the fact. The Mohawks were upset that they were called terrorists although in a broad definition of the term, they did bring very real terror to the people in Oka during those 78-days when public property was destroyed and a police officer was killed. The methods and extent may be different, but terror is terror. Domestic terrorism is just as nasty as the international variety. Now, once again, we’re trying to rewrite history to sanitize it and ensure that a spade is not called a spade.

So the military is going to apologize. The political masters in Ottawa – Harper, et al – have ensured they’ll have a feel good ceremony where all will be whitewashed and those who broke the law will be called law-abiding citizens who were simply protecting their cultural sovereignty.

Meanwhile, Corporal Marcel Lemay would be 51-years old if he was still alive today. Did the Mohawks apologize to his family for his death?

As an ex infantry officer I couldn't agree more with your commentary. Brad

Thanks Brad. I'm afraid my tolerance for this sort of thing is getting less and less. Cheers.