What do you do about North Korea? 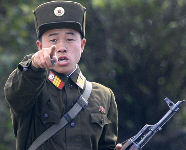 The North Korean government has admitted responsibility for sinking a South Korean navy ship, killing its crew and has launched an artillery strike against a South Korean island, killing at least four people, all the while claiming self-defence. The world seems powerless to do anything about the aggression – apart from various political leaders condemning the attacks and then hoping another such attack does not happen. Global impotency at its best.
Of course, we need to remember that North Korea may in some ways be a pressure release valve for China and Russia. Both are allies of North Korea and both sit on the feeble UN Security Council (as Rex Murphy describes it, "the world’s most useless transnational organization") where it is reasonably expected they would veto any Security Council resolution aimed at condemning North Korea. After all, they are communist brothers-in-arms and it’s a “family thing” you know. What’s going on in North Korea at the moment is no different than what happened in China under Mao Tse-tung or in Russia under Stalin. Thousands, perhaps hundreds of thousands starved to death while the military and political establishments (are they separable?) built up enormous wealth and resources.
The other dynamic is that the North Korean leadership is changing and the new leader-to-be may be trying to flex some of his military pecs to show everyone who’s in charge and who’s not afraid. Certainly, reports on the North Korean state TV channel praise the leadership’s bravery while playing military tunes in the background. (Too bad most North Koreans can’t see it because there’s no electricity.) The sabre rattling is as much for a domestic audience as it is for the rest of us. The only question is how far are WE prepared to let the sabre rattling go? Are another two hundred deaths an acceptable limit? Maybe a thousand? Maybe three thousand? Where’s our breaking point if indeed we have one or are we too scared of China?

Very good points VP. That's my sense too about the muscle flexing to send a message about the new kid on the bloc being just as powerful(demented) as pop. We are a useless world sometimes indeed when so many people die from starvation when this otherwise food money goes into military might like that.

Interesting since yesterday with the Wikileaks info, that said China considers N. Kor. to be a spoiled child. Hopefully now that this bit of info is world knowledge now, that it will be easier for them to stop acting like a big brother, and be willing to punish instead.

IMHO, the Chinese government has one goal - self-interested preservation of the communist state. They talk a good game but I'll believe it when I see it.

Good to see YOU back in the blogosphere! :-)

The Korean peninsula is still in a state of war with just an armistice all be it a long one.Get the warmongering Americans off the peninsula and peace will come.Let the Koreans work it out for themselves.

With the help of the Chinese perhaps? ;-)