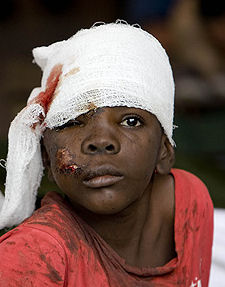 It was almost a year ago that the January 12th earthquake devastated Haiti and left thousands and thousands of people homeless, without clean water, no electricity, no infrastructure and for many, no hope. It is no surprise that the situation remains the same, despite massive donations from people across Canada and around the world.

The corruption that was a trademark of Haiti under the Duvalier’s has not changed in the least. If there’s a buck to be siphoned off somehow, then there is a government official in Haiti who will do it. The stories have been coming out of there for the last year about supplies being held up in storage and huge sums being charged for that storage. There are more stories about government officials rebuilding their homes with foreign aid dollars while their people suffer in the so-called temporary tent cities.

I remember when I saw the early pictures of those tent cities – all I could think was “settle in folks – these will be your homes for a long time”. There are thousands, perhaps hundreds of thousands, crammed into these so-called makeshift emergency communities. Despite the hundreds of millions of dollars donated by citizens of the world, very little is reaching the suffering people on the ground.

In so many ways, it seems to be a typical third world story … the west donates huge amounts of money to help with disaster relief and too much of it ends up being spent on administration in the aid agencies offices while too much of the rest of it goes to the senior officials in government who enjoy largesse beyond our imagination. Think of the hundreds of millions of dollars that Robert Mugabe has stored away in various Swiss bank accounts.

We were criticized by the Pakistanis for not offering more support when massive flooding hit their country in July of this year. Is it perhaps because we have seen so much corruption that we realize that none of our money may ever reach the people who need it? Consider the confirmed reports that say senior Pakistani officials, including police and military leaders had levees diverted away from their sumptuous estates so that the flood waters would spare them and destroy poverty-stricken villages. It is these same officials who later said the west was not doing enough to help their country.

For me and so many others, it’s a case of charity fatigue. The well is only so deep and despite our concern for the people in those countries, we have only so much to give in terms of resources and emotions. When the corruption becomes as blatant as it is in Haiti now, then the well runs dry.  My choice is to give directly to where I know my donation will make a difference - my choice is Hands Across the Sea.

One would hope that with the elections presently underway in Haiti, there might be some change in administration, but the reality is that it won’t. The corruption will continue uninterrupted as it has for the last century.