Of vampires and nipples 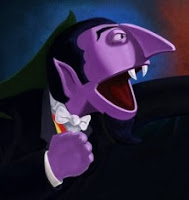 Have you noticed the upswing in “vampire” related movies, television shows, books and the like lately? Wonder why?

That thought occurred to me the other day as I was reading an article in Men’s Health about an actor in a current vampire show and his fitness routine. It appears that not only do you have to be partial to blood for nourishment but you also have to have a killer set of abs. Regrettably, it leaves me out on both counts. My experience with blood pudding in Ireland while I was going to school there many years ago turned me off that and a killer set of abs is not in my future.

The actual term vampire was not popularized until the early 18th century. Bram Stoker's 1897 novel Dracula provided the basis of modern vampire fiction. Maybe it’s some sort of evolution of the macabre Goth culture that was so popular a few years ago.

I just wonder why there’s such a fascination now.

As for nipples, there’s no real connection with vampires except that every time a nipple pops out of a bustiere, there seems to be this hue and cry about the moral turpitude of the masses. Many of us will remember Janet Jackson’s “wardrobe malfunction” during Super Bowl 38 in 2004.  Justin Timberlake still has trouble keeping a straight face when he talks about how surprised he was when it happened.

Recently on the ABC television show Good Morning America, another singer had another wardrobe malfunction and out popped another nipple. Once again, up goes the hue and cry.

My question is why?  Are we such prudes that seeing a nipple causes us to go into anaphylactic shock?

I think I saw my first nipple at about age day one. I’m very glad that I did. It certainly beat the vampire option.

Wardrobe malfunctions are publicity stunts. Why give them any more mileage than they already have?

Considering the amount of material used these days, nothing is left to the imagination anyway, so why get our collective knickers (or otherwise) in a twist?

Alternative universes are the ultimate form of escapism? I totally understand it, having a granddaughter who gobbles this stuff up. I used to love sci-fi at her age.
As to nipples, I often wonder would anything ever titillate us if we all walked around nude and removed the mystery???
And school in Ireland? My dear you get more and more titillating yourself!
XO
WWW

Being a Trekkie, I appreciate the fascination with some of this stuff, but it seems that the vampire stuff is everywhere, in terms of all forms of media. Just one of those puzzlements I"ll have to live with!

As for walking around nude, it might work in your case, in my case, they would have to create a new definition of obscenity! LOL