Moncton breathes a sigh of relief 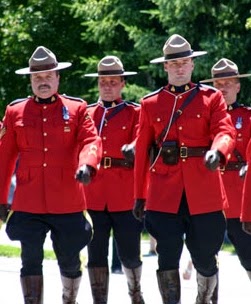 People in Moncton, New Brunswick are celebrating this morning, with the news late into the night that the RCMP had arrested the man they suspect of shooting and killing three RCMP officers and wounding two more.


The small city was on lockdown for a couple of days as hundreds of heavily armed police from across the Maritimes converged on Moncton to assist in the search for the killer. Small police departments in other parts of New Brunswick sent a single officer while entire emergency response teams from other jurisdictions made the trip to Moncton, or “the hub city” as it’s known across New Brunswick.


Few people other than first responders can understand the emotions those police officers faced every day.  For the RCMP, they were dealing with the grief of losing three of their colleagues and friends while searching for the police killer and putting their own lives on the line as he was known to be armed with high powered rifles and other weapons.  Any one of them, at any time, could have been the killer’s next victim.


Everyone can tell you a story about a bad cop or they can point to a video on the internet that shows someone being abused by the police, but the fact of the matter is that it’s a case of one bad apple in the barrel.   I had the extreme good fortune to work as a first responder for a number of years and came to know and respect the police with whom I worked.  They were most often the men and women who would run into a burning building to rescue a child, dive into the river to save a drowning person or end up at a family’s door in the middle of the night to tell them a loved one had died in a car accident.  The one universal truth about police officers is that the caring gene is built into their DNA.


When those three officers who were killed in Moncton responded to the call of an armed man on the street, they were going to help protect the community, to make it safe for children to play on the street, for seniors to take their daily walks and for families to live in safety.  Instead of that, they ended up being killed by a cold blooded killer waiting in ambush for them to arrive.  One will never know what prompted the killer to act in the way he did, but one cannot help but feel that perhaps he deserves the same justice that he used to take the lives of those three officers.  Too much money has been spent on him already.


The police who arrested him last night will head back to their regular jobs today – handing out traffic tickets, trying to settle domestic disputes, investigating assaults, and trying to make the community a safer place for all of us.  The least we can do when we see a police officer today is say thank you.

The one universal truth about police officers is that the caring gene is built into their DNA.

Having two police officers in our family we sure know how true your statement is.