A glimpse into our world 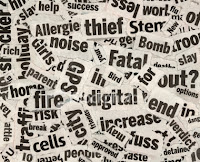 Ever read headlines that make you wonder about where we’re headed?  We seem to be able to muck up things on our own pretty good, so much so that the old "hell-in-a-hand-basket" line doesn't seem quite so far fetched as it once did.  Is it any wonder that bloggers never seem to lack for material?  :-)

Police scramble to fight flash-mob mayhem
It seems to be the latest evolution in a crime wave. Groups of youth will text one another on their smart phones and gather at a store to steal merchandise. The sheer number of people who show up make it impossible for the store employees to control or apprehend any of the criminals. Why am I not surprised that these yobs and chavs can afford smart phones?
McGill University strikes deal with Quebec gov't to keep charging $29K for MBA
One thing I learned about Masters programs is you get out of them what you put into them. Consider that MUN offers an MBA for about $4300 (depending on the number of semesters), thanks to a tuition freeze that’s been in place since 1999. I would much prefer to do an MBA at MUN with equally qualified learning and about 600% less stress.


I’m supersizing to be the world’s fattest woman, says 52st mother of two
This 32-year old Arizona single mother has some serious mental health issues. She currently weighs about 700 pounds and wants to double her weight. She’s pictured in the story sitting on a sofa with her normal-looking 16 and 12-year old sons. One can only imagine the pain those kids must feel because of their mother’s desire to be the world’s fattest woman.

Aliens may destroy humanity to protect other civilisations, say scientists
ET may be phoning home but it’s not to tell the folks at home how great the earth is, according to these researchers. They say we’ve done such a miserable job at steward-ship that it might be easiest for some alien race to just blow us away to protect the rest of the universe. Frightening to think of how we may be condemning ourselves.

George Lucas and Stephen Spielberg couldn’t come up with the fantasies that we turn into reality for ourselves.

It is very hard not to despair when we look around at the pitiful planet we have created in the name of power and gold.
I am trying to stay away from obsessing about it all and focus on the good, meaningful and "higher" but now and again my head explodes.
XO
WWW

Hah summer and the fools of August are out.

just found out that Jack didn't make it.A sad day for the country.

WWW, you're right of course. Just thinking about all the crap that's going on invites that old black dog in for a visit.

GFB, real shame about Jack Layton. IMHO, he was "the hope" for Canadian politics. Not sure there's another one behind him who isn't a prima dona.