Ethics in the shark pool 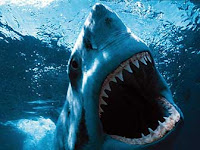 Been watching the media feeding frenzy over Nycole Turmel’s former membership in the Bloc Quebecois with interest.

Turmel, who is now the interim leader of the federal NDP, admits that she had a membership in the Bloc Quebecois before she joined the NDP. It’s a slow news cycle in Ottawa these days so Turmel’s previous membership in the BQ has become a cause célèbre in the offices without air conditioning.

Both Stephen Harper and Bob Rae have weighed in on the news, offering sage opinions about how effective a leader she can be with that sort of past.

As Jane Taber points out in the Globe & Mail, Stephen Harper was a young Liberal in high school, has been a Reformer, a Canadian Alliance member and a Progressive Conservative; Bob Rae was an NDPer; Elizabeth May had a membership in both the NDP and the Liberal Party.
Gawd, that means by the current standard that Harper and Rae are presenting that NONE OF THEM are fit for leadership.

Elizabeth May is the only federal leader who is saying, hold on here … it’s a case of the pot calling the kettle black ass. But it’s the Ottawa way.

Especially since Harper and his band of tory evangelicals have taken over.

I was naïve to think that Bob Rae had a little more ethical depth.

always liked Elizabeth, as for the rest it's do as i say , not as i do. Harper being one of the biggest hypocrites.

Amazing with ALL the real shyte they could be dealing with, they fasten on such a distraction.

Enough to make cynics of us all.

T12, you have that SO right. I watched a video of a talk he gave at the Toronto Mayor's recent BBQ ... you could sense the insincerity just dripping off Harper.

WWW, and that's precisely the reason they're using so many words to condemn Turmel. Either that, or they could talk about how John Baird sucked up to Hilary Clinton during their recent meeting in Washington. But that would be *real* news. Rex Murphy had a disappointing colum in the Nat Post this weekend where he slammed Turmel for her previous political affiliations. Guess it was a slow ideas day for him too. The love of your country is not always determined by the arm band you wear.