Is a new playbook in this man's future? 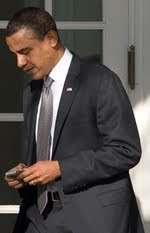 US Prez Barack Obama defied government officials when he won the job of President and insisted he keep his Blackberry. There were reports the unit was modified by US security officials so it was triple or quadruple encrypted and getting on the President’s e-mail list meant clearing the top levels of the security grid.

Now, Research In Motion, the company that makes both the Blackberry and the Playbook has received approval from the US government for use of the Playbook by government employees. It’s great news for RIM because the Ontario-based company has been taking a beating lately in the stock market.

What launched RIM into the stock-market stratosphere was when it became the smartphone of choice for governments and other large global organizations. Apple’s I-series devices have significant penetration into the consumer market but they don’t compete with the Blackberry in the prosumer market of government and big business. Of course, it was RIM’s commitment to security which helped the BlackBerry smartphone become the mobile device of choice for governments.

In my recent previous incarnation, I seldom was separated from my Blackberry and found it to be an indispensable tool for the work I was doing. I easily understand how someone like Obama would see it as being the same. As to whether he’ll opt for the Playbook is anyone’s guess. As for me, it’s not in my foreseeable future, simply because I don’t need it. With a desktop, laptop, netbook and Blackberry, I’m technologically enough enabled!  :-)

Gee 4th time trying to leave comment as my phone keeps pinging :)
I keep thinking have we maxed out in technology?
"the final frontier?"
Not by a long shot. My daughter is involved in this new google circles beta testing and she is raving about it....
XO
WWW

"With a desktop, laptop, netbook and Blackberry, I’m technologically enough enabled! :-)"
Oh ya! Well ya got me beat; all I have is a desktop and two laptops.There are two things on the horizon tho namely an unlocked cell phone and a kindle. Gotta keep up with our kids ya know.

WWW, I read somewhere where Bill Shatner managed to get booted off Google Plus for violating some of the standards, but when he Twitted about it to his legion of fans, he was suddenly reinstated. Gee, maybe I should develop a legion of fans first! ;-)

I bought the Acer netbook at Staples when they had them on sale for $198. I thought it would make my job a little easier. That was until I lost my job. Blah! :-(

Now it sits in the cupboard and hasn't been touched for at least two months.