The cracking rock - Part I 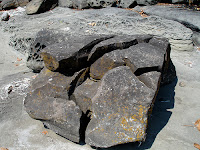 Faith is a strange thing. It can sustain us in time of need and be something we run from when it’s not going our way or we feel that we’re in control. For more than a billion people on this planet, their faith in Jesus Christ is channelled through the Roman Catholic Church, the world's largest Christian church.
For those of us who are “cradle Catholics” (raised as such from birth) we have been taught that the Roman Catholic Church is the “one, holy and apostolic Church” with all of the others apparently being lesser lights. For many of us, this dogma meant we believed that Jesus Christ somehow CHOSE the Roman Catholic Church as the embodiment of the Holy Trinity on earth.

That belief has been taking a serious beating as we’ve come to understand just how “human” the Roman Catholic Church, and more specifically the Vatican, really is. It’s not new, by any stretch – consider the popes in the 15th century. “The Borgias” is a current historical fiction television series based on the reign of Pope Alexander VI and his family; it shows their struggles to maintain their grip on power in ways that would alarm even the present day Mafia. One has to wonder if much has changed.

While the better known sexual abuse scandals of the last sixty years in the Roman Catholic Church have held center stage in much of the secular media, the list of other suspected crimes is very long – everything from clerical pilfering from the collection plate to money laundering to suspected murder in the case of Pope John Paul I. Taken in its full context, it truly is frightening.

And yet the Vatican officials, including the present pope Joseph Ratzinger, ask the “faithful” to be patient, penitent and pray for forgiveness as if it was the faithful who had committed these horrendous crimes instead of corrupt priests and bishops, possibly going right to the top of the clerical ladder.

While apologies are offered, there is still a river of denial as wide as a Mexican river coming from the Vatican. And with that denial is often an attempt to circumvent secular law while hiding behind “canon law” using the argument that Church law supersedes civilian law. Nothing could be further from the truth, but like a skip on a record, we hear it over and over again. In reality, it amounts to the obstruction of justice.

I recently read an article on how many Roman Catholics are leaving the Church. I don’t recall the exact numbers but in the United States alone, it is staggering. The flood of immigrants may appear to be compensating for the loss, but it is a far larger problem than simple numbers. People are so thoroughly disgusted with the Church that they no longer want to be associated with it. They have heard so many stories of the abuse and misuse of power that it has sickened them.

Those who have dared to speak up have been silenced by Church officials. Think of the number of leading Roman Catholic theologians who have been censured and threatened with excommunication if they continue to teach their beliefs. Think of the extraordinary number of Roman Catholic liberation theologians who were condemned by the Vatican because they dared to suggest that perhaps Jesus really was preaching a social gospel, a liberation from unjust economic, political, or social conditions. To the swishing soutanes of the Vatican, that was outrageous.

There are far larger problems in the Roman Catholic Church than the sexual abuse scandals, but the sexual abuse scandals focus our attention on much that is wrong within the Church. We can see through the prism of a multitude of reports and investigations by police and other authorities how the corruption is endemic to the Church hierarchical structure. The motto would seem to be “protect the Vatican at all costs”. What is really being protected is a group of power-hungry, ambitious men who want to climb the hierarchical ladder in the Vatican. They create their own rules and play by those rules. Like a modern-day cult, anyone who challenges them is subject to shunning in the most dramatic sense.

There have been three recent reports in Ireland dealing with the sexual abuse scandals which have laid bare the operating methodology of the Vatican as it has attempted at every turn to circumvent the investigations. Those reports have created an uproar among the Irish people and may have put the dagger into the heart of the legendary Irish Catholicism.

In this past week, the Irish Prime Minister made a statement to the Irish Parliament in which he condemned the actions of the Vatican, “The Irish people, including the very many faithful Catholics who - like me - have been shocked and dismayed by the repeated failings of Church authorities to face up to what is required, deserve and require confirmation from the Vatican.”

In Part II of this essay, we’ll explore some of those Church failings.
Your comments are welcome.

Well written, my friend. I have written many, many posts on the Catholic Church and it is only in the last year or so I stopped, it was enraging me too much, particularly the Ryan report out of Ireland which I still haven't read all the way through as I was far too upset.
And I had seen both sides of the "Laundries" from the clergy to the laiety affected.
Yes, I was at a commemorative mass for my mother when I was back in Ireland recently. It was a regular Saturday night mass, 6.00 p.m. My family took up 12 seats and there were 8 others in the church. The priest was a long time family friend and he said privately that the church is Ireland is finished.
XO
WWW

Thanks WWW. I appreciate your encouragement. Prime Minister Kenny is to be commended for his statement – government leaders have spent too much time pussy footing around this stuff. White robes do not purity make.