This article by Bob Kingston, President of the Agriculture Union-PSAC which represents federal food inspectors, appeared earlier this week in the Ottawa Citizen newspaper.  It's a wake-up call for people who take food safety in this country for granted. 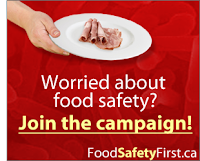 The Canadian Food Inspection Agency might be trying hard to protect Canadian consumers from unsafe imported food. But, the simple fact is the agency is too broke to keep such products from store shelves.

Canada’s import food inspection is a patchwork that ignores some products, while others are examined, with little apparent logic to explain why. For Canadians watching daily reports about Germans falling ill and dying from food contaminated with a new variation of the E. coli bacteria, this knowledge will be cold comfort.

Proactive testing and inspection, other than trend monitoring or project work, is beyond the scope of CFIA’s current front line inspection resources. In fact, the inspection of food imports in Canada is one of the weakest components of the CFIA’s work.

There are only a handful of inspectors assigned to imports for food safety purposes. CFIA can afford to only temporarily assign inspectors to monitor imported food products. While one-off projects such as the Food Import Surveillance Team (FIST) are welcome, FIST has a small complement of inspectors and funding is temporary – for one year only.  The only inspectors dedicated to food imports are wholly funded by industry and their purpose is purely commercial, to determine the quality and grade of imported products, and therefore their market value – not to identify threats to public health and safety.

CFIA inspectors are responsible for the inspection of both import and export food products. But inspectors have no latitude when it comes to export products. Where certification is required, a CFIA certificate for food exports is 100-percent mandatory.  When it comes to inspection of food imports, however, the CFIA has wide discretion to allow items onto grocery store shelves uninspected. This creates an impossible balancing act for inspectors and the CFIA who are subject to heavy pressure from the Canadian food industry to certify their shipments for export.

Everyone knows the unofficial priority is export certification.  In the present resource-starved circumstances, CFIA and its inspectors are too often faced with a situation in which the inspection of imported products always takes a back seat to export certifications.  Stopping unsafe food from reaching grocery shelves is not the purpose of import inspection and less than two per cent of food imported into Canada is inspected. And the vast majority of import inspections are conducted to protect plant and animal health, not to protect human health.

Inspections of products intended for human consumption are conducted primarily to monitor trends and not to prevent dangerous goods from reaching store shelves. For example, in the unlikely event that the CFIA inspects a shipment of fresh produce that is observed to be contaminated by an insecticide or fungicide (because it is covered with a coat of white powder, for example), results from laboratory tests would not be available until long after that product had reached the dining room table.  Inspectors and consumers have no way of knowing what treatments have been applied to imported raw products such as fruits and veggies. Importers of raw fruits and vegetables must declare only those treatments required by Canadian import regulations; any other chemical treatments not required to gain access to Canadian consumers do not have to be declared.

Knowing this, CFIA inspectors take appropriate precautions, such as wearing protective clothing and/ or breathing apparatus, when inspecting these kinds of imports because they have no way of knowing what poisonous or dangerous chemicals have been applied to the products they are handling. Unfortunately, downstream food handlers and consumers are unaware that such precautions may be necessary.  CFIA is not able to ensure equivalency with Canadian standards in the food safety systems of countries that export food to Canada. Since 2007, for example, CFIA has not been able to conduct an audit to ensure that food safety systems in China measure up to Canadian standards. To our knowledge, the only foreign country equivalency assessments conducted in 2010 took place in the United States.

But, it’s not just food imports where the CFIA is not able to meet its mandate to safeguard Canadians. Every CFIA program, apart from processed meat inspection, is under tremendous resource pressure. For example, vacant positions in all programs except meat hygiene are not being filled.

Against this backdrop, the government plans to invest with one hand and cut with the other.  In the next two years, the federal government plans to invest an additional $18 million in food safety inspection. At the same time, the controversial program spending review that Ottawa is conducting could end up cutting more than $70 million from the CFIA’s budget.  The CFIA plans to regulate food imports. This is a good idea in principle, but who will enforce the regulations?

So, regulating and licensing food importers may improve appearances only. Meanwhile, our food safety regulator will continue to lack the resources to inspect imported foods, leaving Canadian consumers exposed to potentially dangerous products.