Harper wraps himself in the Christian fabric of the fundamentalist right 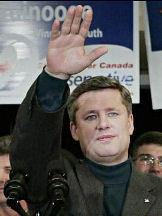 I remember the first time I heard the epithet “dirty Tories” used to describe members of the Progressive Conservative Party of Canada. When I asked about it, I was told that PC candidates would give money to poor people in order to “buy their vote”. It was a revelation to me, who came from a very non-political household where politics was something that was never discussed.
In the years since, I’ve often thought how that description could be applied to just about any political party based on their variable values and shifting ethical positions; however, I think the Tories, under Stephen Harper’s leadership have hit a new low.
The Tories have abruptly yanked two controversial attack ads just a day after publishing them to the Internet. The ads featured an out-of-context video clip of Liberal Michael Ignatieff and resulted in a huge amount of criticism — even from some conservative commentators. Among other things, the ads were slammed as dishonest, unethical, "a clumsy hatchet job," and the work of "drunken frat boys." Twenty-four hours after they were launched, the ads had vanished from the party's website.

However, it mirrors the hit and run style of political attack that Harper has endorsed over the last five years. While he wraps himself in the Christian fabric of the fundamentalist right, he manipulates information, has a wanton disregard for fact and spends so much time on personal makeovers, one has to wonder when he has time for his family. His is far from the ethical role model that the Tory party pitches.

Is the reason that more senior journalists don’t openly criticize Harper because they’re worried they might jeopardize their chances at a senate seat?