Danny Cleary on the mend 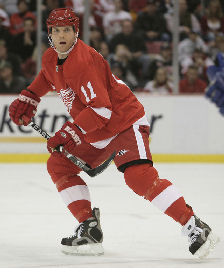 "Things clearly are getting back to normal with Detroit Red Wings forward Danny Cleary, who is giving as good as he gets from his teammates and coach. “The goalies were lit up by me today,” Cleary said with glee in his voice following practice, making sure he stood right in front of Jimmy Howard and Joey MacDonald while doing so. Cleary won’t play Wednesday, when the Wings host the New Jersey Devils, but he should be back from an ankle injury in time for the Feb. 2 game at Ottawa. So should Pavel Datsyuk, who went down with a broken hand Dec. 22 but also has joined practices.
Cleary suffered a broken left ankle Dec. 27 -- or that’s the story, anyway. “He tells me he has a broken ankle,” coach Mike Babcock said, smiling. “He skates the best I’ve ever seen for a broken ankle. I don’t know.” Johan Franzen -- who delighted in whipping around Cleary when Cleary practiced on defense Monday -- at first said, “It’s awful,” to have Cleary back, then offered his evaluation of Cleary’s skating. “No, it’s good to see him out there,” Franzen said. “He’s skating hard, but it looks like he’s got a long way to go before he’s ready.”
Cleary was feeling optimistic after his best practice since he hit the ice again. “Babs asks me every day,” he said about his progress. “Today was definitely the first day it’s felt less pain. I was able to have more movement, and I was able to skate a little better.” Asked what he can and can’t do, Cleary said, “It hurts to stop and to shoot and to turn.” When it was pointed out to him that that pretty much covers it all, Cleary laughed and nodded. “Pretty much everything I have to do,” he said. “But that pain, I’m hoping, is going to go away gradually.” Cleary said he’ll stick around the area and skate during the All-Star break, which is Thursday-Sunday."