Freedom of the press means something to me 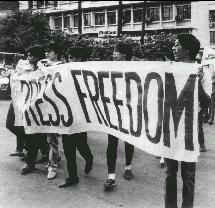 There’s a disturbing trend developing in this country when it comes to freedom of the press. It seems that whenever any identifiable group feels slighted, they immediately attack the media. There’s almost a subsequent knee-jerk from the political sector to join in the media bashing. Witness the recent controversy over the story in Maclean’s magazine about corruption in Quebec. No one bothered to ask if the story was true; all the politicians were concerned about was protecting the French factor.
Maclean’s is again in the spotlight, this time for an article about the number of Asian students at Canadian universities and the effect their presence is having on the character of the universities. The original story was entitled “Too Asian?” – a phrase used during a conference in the USA dealing with that specific issue. Immediately, the pressure from the Asian community and the political sector started anew led, in part, by a Canadian senator who blasts the magazine and calls for an end to the federal subsidy paid to all Canadian magazines. Dr. Vivienne Poy says the public outcry over the article is enough to justify axing $1.5-million. I didn’t hear her once question the accuracy or truthfulness of the article, despite a rather impressive academic resume which would suggest some talent at academic research.

Canada's Constitution of 1982 provides protection for freedom of expression, including freedom of the press. I had the good fortune along with thousands of other Canadians to stand on Parliament Hill the day the new Constitution was signed into law. I think Dr. Poy needs to go back and read that document from start to finish. The reason freedom of the press is entrenched into the Constitution is to protect our press from the sort of political pressure that is so common in less developed parts of the world such as Zimbabwe. Dr. Poy sits on a senate committee, “the MP/Senator Zimbabwe Twinning Initiative”, so she should have a decent understanding of how freedom of the press is not tolerated in Mugabeland. Nor in China.

Over the last years, there has been a steady decline in freedom enjoyed by the press.  “The journalism profession today is up against the ropes and fighting to stay alive, as pressures from governments, other powerful actors and the global economic crisis take an enormous toll,” the Freedom House executive director Jennifer Windsor said in discussing the world press.  She is so very right and it is unacceptable in this country.

Because you don’t agree with a magazine’s perspective doesn’t mean, in this country at least, that you can use your political clout to punish the publication, but that is exactly what Dr. Poy is proposing. It is a slippery slope from there to fear on the part of media to report only what the political and social elite of the country wants to hear. The senate is supposed to be the chamber of sober second thought. I don’t see much evidence of that in this situation.