What’s wrong with speaking only English? 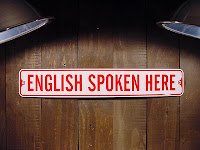 It seems quite a lot if you’re looking for a job with the federal government – whether as Governor General, Supreme Court judge or clerical person in some far flung office of l’empire. It appears unilingual anglos are disqualified immediately because they don’t speak French regardless of what other qualifications they might have. A recent column in the Ottawa Citizen caught my attention when it said this: “The consequence of mandatory bilingualism is as obvious as it is unmentionable in the polite circles of Official Ottawa: the top jobs often won't go to the best people. Former Supreme Court justice John Major -- his tongue liberated by retirement -- has been blunt about this. Make bilingualism mandatory for Supreme Court judges and you'll still get good people. But you won't get the best.” So far, here in Newfoundland, it seems that being unilingual English is not a major impediment to employment … yet.

And some of the most gifted scientists, doctors, academics do not have the capacity for multilinguism.

I think it is slowly getting to be moot, VP, as the population of Quebec declines and its younger citizens embrace L'Anglaise.

It's a fine balance between caring for the minorities and respecting some aspects of our national identity. Interestingly, it seems that Quebec is often the one rejecting minority rights ... language in school for example, wardrobe in the case of Muslim women, etc. If the anglo majority were half as proactive in enforcing English rights, we would be accused of the worst violations of human rights. Sigh.