Stephen Harper is spending a lot of energy, time and MONEY telling us how bad the idea of a coalition government would be.  Surprising how much his thinking has changed since 2004.  Read on ... 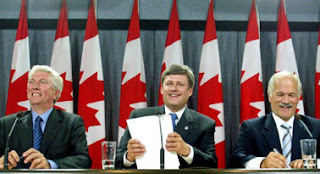 As leaders of the opposition parties, we are well aware that, given the Liberal minority government, you could be asked by the Prime Minister to dissolve the 38th Parliament at any time should the House of Commons fail to support some part of the government’s program.

We respectfully point out that the opposition parties, who together constitute a majority in the House, have been in close consultation. We believe that, should a request for dissolution arise this should give you cause, as constitutional practice has determined, to consult the

Your attention to this matter is appreciated.

(Disclaimer: this copy was taken from the liberal party website @ http://tinyurl.com/63p72hx)

Trusting the tory leader at this point is simply out of the question.  He will do whatever it takes to hold onto power, regardless of the cost to his credibility.

"regardless of the personal cost to his credibility"

Are you actually stating he has some, Veep?

Let me count the ways of his incredibility - nah, I haven't got all night....lol.

I don't know why it is that after being in power for a time the Conservatives turn into the Liberal Party ya know what I mean, arrogance, lying,scammers,crookedness. Like The Who said "meet the new boss same as the old boss"