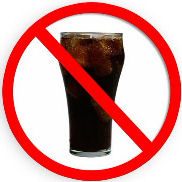 Even if you drink diet soda — instead of the sugar variety — you could still have a much higher risk of vascular events compared to those who don't drink soda, according to research presented at the American Stroke Association's International Stroke Conference 2011.
In findings involving 2,564 people in the large, multi-ethnic Northern Manhattan Study (NOMAS), scientists said people who drank diet soda every day had a 61 percent higher risk of vascular events than those who reported no soda drinking. [Cerebral vascular accident = stroke]
"If our results are confirmed with future studies, then it would suggest that diet soda may not be the optimal substitute for sugar-sweetened beverages for protection against vascular outcomes," said Hannah Gardener, Sc.D., lead author and epidemiologist at the University of Miami Miller School of Medicine in Miami, Fla.

In separate research using 2,657 participants also in the Manhattan study, scientists found that high salt intake, independent of the hypertension it causes, was linked to a dramatically increased risk of ischemic strokes (when a blood vessel blockage cuts off blood flow to the brain).

In the study, people who consumed more than 4,000 milligrams (mg) per day of sodium had more than double the risk of stroke compared to those consuming less than 1,500 mg per day.

At the start of both studies, researchers assessed diet by a food frequency questionnaire.

NOMAS is a collaboration of investigators at Columbia University in New York and Miami's Miller School of Medicine, launched in 1993 to examine stroke incidence and risk factors in a multi-ethnic urban population. A total of 3,298 participants over 40 years old (average age 69) were enrolled through 2001 and continue to be followed. Sixty-three percent were women, 21 percent were white, 24 percent black and 53 percent Hispanic.

In the soda study, researchers asked subjects at the outset to report how much and what kind of soda they drank. Based on the data, they grouped participants into seven consumption categories: no soda (meaning less than one soda of any kind per month); moderate regular soda only (between one per month and six per week), daily regular soda (at least one per day); moderate diet soda only; daily diet soda only; and two groups of people who drink both types: moderate diet and any regular, and daily diet with any regular.

During an average follow-up of 9.3 years, 559 vascular events occurred (including ischemic and hemorrhagic stroke, which is caused by rupture of a weakened blood vessel). Researchers accounted for participants' age, sex, race or ethnicity, smoking status, exercise, alcohol consumption and daily caloric intake. And even after researchers also accounted for patients' metabolic syndrome, peripheral vascular disease and heart disease history, the increased risk persisted at a rate 48 percent higher.

Only a third of participants met the current U.S. Dietary Guidelines for Americans that recommend daily sodium intake fall below 2,300 mg, or about a teaspoon of salt, Gardener said. Only 12 percent of subjects met the American Heart Association's recommendations to consume less than 1,500 mg a day. Average intake was 3,031 milligrams.

"The take-home message is that high sodium intake is a risk factor for ischemic stroke among people with hypertension as well as among those without hypertension, underscoring the importance of limiting consumption of high sodium foods for stroke prevention," Gardener said.

Participants' reporting their dietary behavior is a key limitation of both studies, Gardener said.

In the soda study, investigators also lacked data on types of diet and regular drinks consumed, preventing analysis of whether variations among brands or changes over time in coloring and sweeteners might have played a role.

Thanks for this VP, I missed it.

I am a recovering diet pop addict. It was the aspartame studies that forced me to give it up. I miss it but found a good substitute in sodium free soda water with a splash of organic juice.

I need to go the withdrawal route. I still drink waaay too much of it. I was talking with a cab driver the other day who told me that he used to drink a lot of diet Mountain Dew until he noticed a lot of joint pain. He said once he weaned off the pop, the joint pain went away. Good advice for moi!