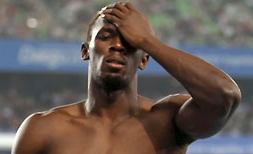 There are few sights more thrilling than watching the world's fastest man, Usain Bolt, break away from the pack and turn on the steam to cross the finish line ahead of everyone else.

Today was not what the world was expecting from the 25-year old Jamaican sprinter. He broke out of the starting block early in Sunday's 100 meter final in South Korea and was disqualified from the race, providing an abrupt end to the dominance he's maintained in track's biggest event since the Beijing Olympics.

It's a disaster scenario for track & field, a sport that thrives on star power more than any other at the Olympics. The IAAF has to ask itself whether it's worth running the risk of seeing a race without Bolt just to prevent a two-minute false start delay.

An angry Bolt refused to talk about the disqualification with reporters. "Looking for tears?" he said to a group of them following him around the track. "Not going to happen."

At the 2009 world championships in Berlin, Bolt ran what was considered a perfect race. His 9.58 still stands as the world.

That was a surprise that he would be dq-ued. It's odd because he actually agreed with the change made last year, to not allow one false start. Several other top world runners were against the change. It seems to be a silly change to make, just adds to nervousness I can imagine.

Hey Charlie, good to see your pixels back on the screen! I was surprised as well that the dqd him. I think a lot of the other guys in the race were gobsmacked that he was given the boot. Be interesting to see how it plays out in the run up to the Olympics.