Weiner’s weiner is THE weiner

If nothing else, American politics is better than any late night reality TV show.
Consider the latest developments … Donald Trump won’t compete for the US Presidency because it would interfere with his TV show … Sarah Palin not only doesn’t know U.S. history but when challenged on her, ahem, “knowledge” tries to rewrite history and sends her minions to edit Wikipedia. 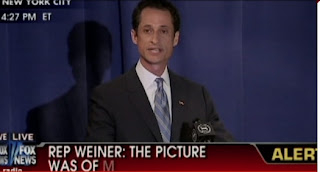 And then, there’s Anthony Weiner. Turns out that Weiner’s weiner is THE weiner in the picture that everyone’s talking about in the States. Weiner held a long news conference in New York yesterday afternoon to announce that he had lied, manipulated the truth and yes, did send the picture of his clothed penis to a woman via his Twitter account. Understandably, the world reacted with shock and horror to the news as the reality finally sunk in that this fine upstanding young, married, Congressman had done what seems to be the norm for many people these days … sending clothed and unclothed pictures of themselves and various body parts over the Internet.

In the midst of all of Weiner’s denials when he was saying that he wasn’t sure if the picture was of his penis, I enjoyed comedian Jon Stewart’s response: “There are few things I’m certain about. That The Empire Strikes Back is the best Star Wars movie, that OJ killed those two people, and what my [penis] looks like.”

Next political controversy in the USA: Does Obama wear boxers or briefs?   (And we wonder why THEY see US as being boring!)

Veep:
I view the USA as a kindergarten and our Canadian selves as high school. Maybe Sweden would be university grads.
I shake my head in disbelief at Usian 'news' when the country is virtually bankrupt, 60 million on food stamps and 50 million without basic healthcare coverage.
And they obsess about a penis?
Playground stuff.
XO
WWW

Is it any wonder that they need "military adventures" to distract the populace from the crisis at home?