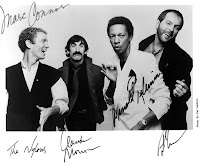 I was talking to a friend of mine a few days ago and she mentioned that she had been watching a live concert recording by The Nylons in Japan in 1986. We remember when the guys came back from that tour, having won a major award over there and they were so pumped. It hit us both at the same time that that was 25-years ago this year. Hard to believe!
The band came together in Toronto in 1979 when four guys who were unemployed actors (any other kind?) got together to sing and only sing because Claude Morrison (guy with the mustache)  was the only one who played a musical instrument, a piano, and they didn’t have/couldn't afford one. But they had powerful voices, honed on stage and they instinctively understood a cappella harmonies. They signed with Attic Records in 1981, just two years after forming, and released many albums over the years with various record companies.

Morrison is the only one of the four still with the group. Marc Connors from Ottawa, who was the driving force in the early days and worked out a lot of the high energy choreography, died in 1991 and Denis Simpson who went on to a successful career in TV, died about a year ago. Paul Cooper, the good ole Tennessee boy, who did most of the early writing and arrangements, retired two or three years after that Japan concert.  Arnold Robinson replaced Simpson as the bass before the Japan tour.

Their background in theatre provided some important skills. The dramatic use of lighting, costumes, sets, staging, and choreography brought the sizzle to their shows. They use only percussion for accompaniment – either a tambourine, shakers or hand clapping and finger snapping. As Cooper once said, it’s all natural, man!  (They experimented with instrumental accompaniment a few times but it never become a standard)

Music lifts the spirits, so I’ve included an excerpt from that Japan concert at the bottom of this page … The Lion Sleeps Tonight. As you watch Connors and Morrison trade falsetto leads, I’d be surprised if your foot’s not tapping in time.
Enjoy!

I don't know what's going on Veep, but this thing is eating my comments.
I will save this one before posting:
My daughters and I discovered this group back in the day at Ontario Place when there was this magnificent amphitheatre, subsequently bought and paid for and destroyed by the Molson company.
We never missed one of their subsequent concerts in Massey Hall, etc. Their voices and performance art brought us to our feet and to the aisles to dance and sing along. Amazing. I have their old albums on my IPod.
Lovely lovely memories.
XO
WWW

Something special about The Old Lady of Shuter Street. Saw many incredible concerts there over the years but the Nylons were among, if not, the best. I saw the current group perform a couple of years ago and it’s a very different, far more subdued act now. I have their CDs around somewhere but putting them on the ipod sounds like a good idea. I keep telling myself that too! :-)