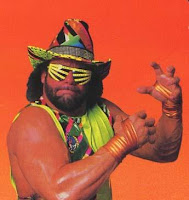 Here’s one for the boys.

If you thought Randy “Macho Man” Savage was one of the coolest wrestlers around with one of the prettiest managers, hold up your hand! Almost unanimous!

The “Macho Man”, a pro wrestling icon whose fame reached far past the wrestling ring as a television pitchman with the phrase, “Snap into a Slim Jim, Oooh yeah” died on Friday morning in Pinellas County, Fla. after reportedly suffering a heart attack while driving, leading to an auto accident.

Randall Mario Poffo (his real name), was 58. While perhaps best known for his pro wrestling battles as Hulk Hogan’s major storyline rival in the late 1980s, Savage was also an actor and a one-time major league baseball prospect.

Lanny Poffo, his brother and also a former pro wrestler under the handle “Leaping” Lanny Poffo, said that Savage suffered a heart attack behind the wheel while driving. He veered across a concrete median, past oncoming traffic, and collided head-on with a tree. He was rushed to the hospital where he died from his injuries.  His wife who was in the truck with him survived.

Savage was intense and driven in everything he did. He played minor league baseball from 1971-74 in the St. Louis Cardinals, Cincinnati Reds and Chicago White Sox farm systems.

An outfielder, after he blew out his right shoulder, making him unable to throw with any force, he taught himself to throw left-handed in an attempt to continue his career. “I saw his tryout with the St. Louis Cardinals in 1971,” remembered one observer. “Man, he could hit. He was a little squirt, I don’t think he was more than 165 pounds at the time.” He batted .232 with nine home runs and 66 RBIs in his final season of pro ball, with Tampa of the Class-A Florida League, before turning his attention full time to wrestling.