We’ll get what we deserve 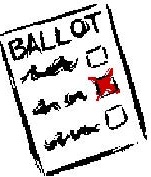 For the first time in many years, I've made up my mind that I'm not going to participate in the coming election. The reason is that I refuse to hold my nose and vote for the one I think is the best of the worst. To me, that's not democracy; rather, it's what politics in this country has become.
I realize that there are millions of people around the world who would give their right arm (and possibly have done so) to have a free and unencumbered vote, but we moved beyond that centuries ago and now have a choice to a right that we take for granted.  It is not an obligation.
The national political scene has become a circus. I’m still trying to figure out why the separatist leader in Quebec was participating in a NATIONAL political debate on television when all he cares about is Quebec. Include Duceppe in the French-language debate if you will, but frankly, I could care less what he thinks and what he wants. All I ever hear him whining about is how rough things are in Quebec. How do you spell a-c-c-o-m-m-o-d-a-t-i-o-n?

From my perspective, tory leader Stephen Harper becomes less trustworthy by the day. Turns out that just before he shut down parliament for the vote, he engineered a big increase in pay for his top political staff. I’m beginning to wonder if there are any pork barrels in this country he hasn’t topped up. He becomes more unpalatable every time I see his manicured & coiffed mug on TV.

The grit leader Michael Ignatieff may have written a handful of books and is a recognized scholar, but I’m sorry Mikey, your attempt at becoming the common-man is as phoney as Harper’s stylized image. While I’m sure you intellectually understand liberal principles, I still don’t see you as being a convert.

As for smilin' Jack Layton, if he really believes and practices NDP philosophy, why was his campaign stop in St. John’s scheduled for one of the most expensive hotels in the city? Is that a harbinger of things to come? I had actually thought about going to hear what he had to say until I realized it was at the Delta. It's not as if they needed a room that could hold a thousand people.

I realize this focuses on the national leaders rather than the local candidates but locally in St. John's South-Mount Pearl, as far as I can tell, from what I’ve read on their individual websites, none of them qualify for my vote. I’m not prepared to vote for someone just because they carry a specific political banner or are a recycled tory or whatever.

We’ll get what we deserve in government and very little will change.

Time to move on to other things like arrogant St. John’s drivers.

My sentiments as well on the Federal scene. Whenever given the opportunity to vote I have always exercised it in the past, but this time I am having a hard time reconciling voting for any of the parties, even the greens, who for the main are way too conservative for me.

So if I don’t vote it seems a waste of my democratic right, but if you spoil the vote then that is illegal [but who would know].

Seems the best way to register your discontent is to go and vote and put either a blank ballot or one that has two or more x’s marked on it into the box.
That way your vote is registered and rejected, which is better than spoiling the ballot which does not get counted.

Drivers here are forgetful when it comes to turn signals, So you have to check at a stop street to really see if their front wheels are turning.I guess thats to expect from a town full of coffin dodgers .

Brian, I went through some of the same quandray about "democratic right" but with the playing field as shallow as it is, I just can't participate in the exercise. Your point about two Xs is a good suggestion and one that I might follow up on, but I haen't ben enunerated and haven't chased it down to get my name on the list, so unless neighbours told them who I was (which wouldn't surprise me) I'm not on the list even. :-)

As for the St. John's drivers, I really don't know what it is that gets them going, but whatever it is. they give the impression they're above the law. But since the law so rarely seems to be enforced in town, who cares I guess?