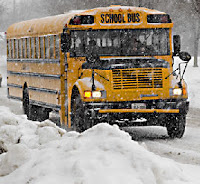 There are some school bus drivers in this town who need a new job. During the height of the snow storm earlier this week, some of the buses got stuck. The rules are pretty clear: in such a situation, you keep the kids on the bus where they’re safe and warm and wait until another bus arrives. Pretty easy for a responsible adult to understand, right? Apparently not.

There were reports in the press of bus drivers allowing kids to get off the bus and in one case, a driver got kids off the bus to try to help push the stuck bus up a hill. As at least one parent was quoted as saying – what would have happened if the bus had slid backwards with those kids behind it? Good question indeed.

The phrase “reckless endangerment of children” comes to mind. I know the local school board says it’s going to investigate and talk to the private companies that supply school bus services but perhaps the child protection folks at social services should be involved as well. There's way more involved here than just a contract in terms of provision of service.  These children were being placed at risk by the specific school bus drivers who are supposed to be trained in how to protect the kids. The system failed. Fix it before it fails again.