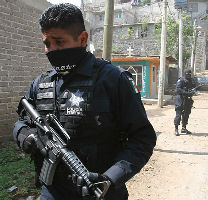 It amazes me why tourists are still going to Mexico. I’ve read half a dozen stories in the last week alone where tourists have been the victims of kidnappings, shootings, scam traffic accidents, shake-downs by the local cops and the list goes on and on. And yet, I’ve heard people say they would be happy to go back there despite their experiences.
Maybe they need to give their heads a shake. A number of years ago, before the drug wars hit their pitch, I was in Laredo, Texas and thought about going to Nuevo Laredo which is on the other side of the misnamed Rio Grande. Friends at the time said don’t go because the level of crime and corruption on the part of the local cops is so high that even if you don’t get robbed, you could get arrested and be forced to pay thousands of dollars to get back to the USA.
Those warnings are still in place and yet people insist on going and then are surprised when they’re ripped off or worse. The US State Department’s travel advisory about Mexico paints a pretty dismal picture.

Do yourself a favour amigos … find another place to vacation. No point in becoming yet another victim. hasta la vista!

I truly love Mexico and have been there many times. It is a cultural and historic and artistic feast.
My granddaughter just got back yesterday from there and had a blast.
No, I won't pay attention to any advisories.
XO
WWW

The wonderful thing about adulthood is you can make up your own mind.