An article in the December 6 issue of Maclean’s magazine is entitled “Don’t be sabotaged by a selfish partner”. It’s a discussion of a book written by psychologist Jane Greer - What About Me?: Stop Selfishness from Ruining Your Relationship. 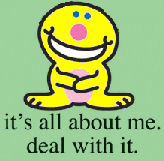 Greer says that young couples are bringing the me generation mindset into their relationships in such a way that many of them are doomed. “Never before has the lament ‘You’re not listening to me’ rung so true. In fact, people are listening to and paying attention to everyone and everything except their partner and their relationship,” she writes. “Porn is a click away, old flames are waiting on Facebook.” The new selfishness is changing even the way people think about their relationships: “When it comes down to giving time to your partner, it can feel like a loss of your personal needs rather than an expression of love,” writes Greer.
I remember when the reality TV show phenomena was just starting. Everyone wanted to get a look into the lives of the rich and famous – but basically all you got to see was selfishness and greed, which of course satisfied most of the tweens and 20-something viewers. It confirmed for them that it was “all about me” and to hell with the rest of the world. It’s only gotten worse.

I know a young woman who told me that at their wedding about a year ago, while they were walking down the aisle after the marriage ceremony, her new husband was checking text messages. Her concern was that he wasn’t focused on her. In the meantime, it seems she’s never heard of the word “our”; everything is “my”. Perhaps it’s the new way of being a couple.

What it seems to mean is that two spoiled brats are coming together in a relationship that has minimal chance for success. About the only ones who will be enjoying the spoils are the divorce lawyers. Sad commentary.

Interesting VP. Certainly My is one of the modern catch words, like MySpace, MyPhone, My Mun.. We also used to say, many still do of course, say "mom" in reference to our mothers, but for many years now, younger generations say "my mom". It certainly suggests a heightened sense of ownership and personal property.

By the way, I mistakenly typed in the address for your site, and wondered if you had changed cultures :) see here http://viewpoint2010.blogspot.com/

Charlie, you're right on with regard to the branding. I guess it's why advertising consultants are worth their weight in share points! I wonder how long it will be before we all live in bubbles and communicate with each other only by texting since sexting seems to have taken away the need for physical intimacy. Really is sad.

As for the Arab alternative website, we offer that as an option for our middle eastern neighbours who are trying to change classrooms. (At least that's what the auto translate feature seemed to suggest is going on there) LOL

Thanks for your observations.

Interestingly Paul predicted all this in 2Timothy 3:1-5 particularly this "for men shall be lovers of self...."

My observation has been VP that damaged people pursue "stuff" to fill the holes. Truly content people never do but take delight in the usually 'free' events like sunsets and wild rabbits, etc.
it is sad that so few are content.
True love looks outward and never inward.
A texting groom is a very sad commentary on the future of his marriage.
XO
WWW

What’s even sadder for me WWW is that this is becoming the norm. I hear that in university lecture halls now, it is not uncommon for three-quarters or more of a class to be using their electronic devices while a lecturer is trying to deliver a lesson. Some speak of a “new way” of learning. To me, it’s an old way of disrespect but that is a common malady today. I’m not sure if it’s a lack of contentment or what, but so much of what I see today is rooted in a lack of respect – first for self and then for others. That new groom probably is so conditioned to immersion in self that he wouldn’t realize the message his actions sent. As a people we are becoming so disconnected from one another that I find it alarming but you know something else – I find myself starting to do the exact same thing. I have grown so tired of trying to connect with people that now I find it much easier to ignore. And that has only been within the last year. Talk about a conditioned response.