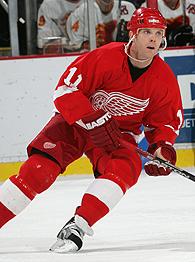 The Detroit Red Wings will have to get along for at least a month without leading goal scorer Danny Cleary from Harbour Grace who suffered a broken ankle in Sunday’s 4-1 victory over Minnesota. The 32-year old Cleary was hit by a shot from teammate Brad Stuart in the third period and limped to the bench. He returned for two more shifts but was in obvious pain after the game. “I didn’t know what was going on,” Cleary told the Detroit Free Press when explaining his return to the ice. “Sometimes in the boot, it can stay. It was sore, but I knew after the game something was wrong.” Cleary, whose injury was confirmed by X-rays, estimated he would miss “a month at least. I don’t know the terms, but there’s a fracture in my ankle.”
Cleary, who struggled for most of last season with a knee injury, scored his 16th goal in the first period. The right winger has become an integral part of Detroit’s offense and his consistency and energy will be missed. "Cleary is one of those … I don't think he really maybe gets the credit he deserves," defenseman Niklas Kronwall told the newspaper. "He's doing a really, really good job for us, and I think he's been one of our most important guys so far. He's one of our leaders. It's tough to lose him."

The feeling is shared by Cleary, who will be replaced in the lineup by callup Jan Mursak. "I'm really upset about it," he told the newspaper. "I don't know what to say. No bright side. Just, four or five weeks, make sure I get back to playing the way I was, that'll be the goal."