When is enough, enough?

That question occurred to me this afternoon when I read that thirteen medical specialists have said they are resigning from their jobs in Newfoundland because the provincial government will not pay them what they feel they are worth. Two other specialists announced earlier that they are leaving as well, so that brings the total number to fifteen specialists packing their bags and heading off to more profitable shores. 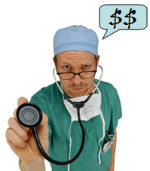 The doctors are playing hardball. Some of them are quoted in today’s press as saying that their departure means children will have to be flown out of the province for specialized tests they now receive at home. They’re trying to make government feel guilty about not giving them more money. The government already has offered them a THIRTY ONE PERCENT increase in pay but they want the same 40% deal that the government gave oncologists and pathologists. They probably also want the special bonus deals the oncologists got which means that if most of them are out of town on a weekend, the covering oncologist gets bonus pay that probably would equal most of our weekly pay checks.
My point about “enough is enough” is based, in part, on the online story at the CBC website which said, “The government offered 97 per cent pay parity with doctors in Atlantic Canada — phased in over four years from 2009 to 2013. The province's more than 1,000 doctors would receive 40 per cent of the pay increase in the first year of the contract and 20 per cent in each of the next three years.”

Ten of those doctors who are leaving Newfoundland got their Medical Doctor degree from Memorial University as follows:

For anyone who’s interested, you can find this information at the website for the College of Physicians and Surgeons of Newfoundland and Labrador.

In most cases, they have long service to Newfoundland & Labrador with the exception of Laura Vivian who graduated with her MD in 2004 and then would have completed her residency after that. The College of Physicians and Surgeons website does not show where they did their residency training in their specific field nor does it show how many are native Newfoundlanders.

An article by Daphne Bramham in the Vancouver Sun a few years ago put all of this in perspective. “The Canadian medical profession is the largest sheltered workshop in the country. From the time doctors enter medical school until they retire, they are among the most pampered and protected groups in our society. Medical students pay the smallest proportion of the true cost of their education compared to students in all other programs, including other professional programs. Interns get paid to work while they do their training. Engineers don't. Dentists don't. Teachers don't.”

The bottom line is that none of us are paid what we are worth or what we *think* we’re worth. If we were, then some would be enormously happy while others would be profoundly sad. Remember: paid what we are WORTH.

Doctors in this province make a VERY good living and there are many other professionals with similar length of training who make much less, so please don’t give me the old story about how many years they spend in school. It no longer holds water. They are professionals; they are not gods. A radiation oncologist is no more important to my life than a civil engineer who designs the bridge I’m going to drive over.

Perhaps it’s time we take a serious look at the pedestals the doctors have built for themselves.

Wow - what a great posting. This really needs to be said. The other component is that physicians are probably the profession with the least emphasis on performance management. If you're on salary as a physiciain and you want to see five patients a day, why wouldn't you do that, versus seeing 15 a day if you get paid the same amount.

Thanks anonymous. You raise a good point about performance management.