I love language even though I don’t always use it as accurately as I should. So, when I saw a headline today announcing the Oxford Dictionary of English had some new words added to the list, I had to go take a look. I was a little disappointed to learn “vuvuzela” is now a word in the ODE. For those who may not remember (how could you forget), it was that gawd-awful one note (the B♭ below middle C) plastic horn the idiot-fans at the World Cup matches insisted on blowing throughout the matches. It was a cheap rip-off of a kudu horn made in China.


That aside, there are some great new words added to the Oxford list. Here are a few: 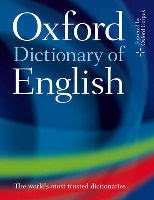 •bromance: a close but non-sexual relationship between two men
•buzzkill: a person or thing that has a depressing or dispiriting effect
•cheeseball: lacking taste, style or originality
•chillax: calm down and relax
•defriend: removing someone from a list of friends or contacts on a social networking site
•frenemy: a person with whom one is friendly despite a fundamental dislike or rivalry
•interweb: the Internet
•wardrobe malfunction: an instance of a person accidentally exposing an intimate part of his/her body as result of an article of clothing slipping out of position

Maybe something like this. “It started out as a bromance but he turned into a frenemy whom I had to defriend after I realized he was a total buzzkill cheeseball.”