Love it when a plan comes together 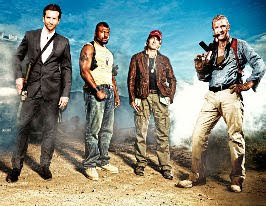 The A-Team movie opens this weekend. For those of us who were BIG A-Team fans back in the 80s (1983-1986) it was a weekly event you didn’t want to miss. (Quick aside: the complete series is now available on DVD for $110.00 at Amazon.ca). Haven’t had a chance to see it yet, but it is playing at both Empire cinemas in the St. John’s area. Will probably check it out some evening next week – want to avoid the mouthy ankle biters.

Brian Johnson from Macleans offers this commentary: “ … starts out as an origins story, showing how the quartet comes together as a brotherhood of former Army Rangers whose paths collide. The setting is updated, with the Iraq war providing the backdrop and a private military contractor named Black Forest—an obvious reference to the real-life mercenary army, Blackwater—serving as the villain. There’s even a dash of political content as Face greets the Black Forest operatives: ‘I thought you boys would be busy installing a dictatorship or overthrowing a democracy. . . You’re not soldiers, you’re assassins in polo shirts’.”

Two excellent actors are in the show. Liam Neeson and Sharlto Copley, who did such an excellent job as the star in District 9. Looking forward to seeing it. Here’s a trailer …

I saw it last night and like you, I'm a major A-Team fan. Liam Neeson was great but I think Coply stole the show. He IS Murdoch, better than Schultz played him. Ya have to go see it VP.